Tarot card spreads are just as important in Tarot readings as the cards are themselves. Each card position adds a different flavor to the overall meaning of the card, which creates a unique outlook for the complete interpretation. A Chariot card would mean something a little different if it’s in a spot that represents upcoming obstacles compared to when it sits in a place that means underlying strengths. There are many hundreds of existing Tarot spreads, and there is nothing stopping you from even designing one of your own.

Many beginners in Tarot look to the famed Celtic Cross spread for their first experience, which is a little strange because it’s actually a large and complicated layout with 10 cards. If you want to start off with a less daunting Tarot card spread, there are lots to choose from.

This is one of the simplest approaches to a Tarot layout, and a decent place to begin though it won’t provide a huge amount of detail. Shuffle and deal out 3 cards. The first represents the past, and will give you some insight into the origins of your situation. The second card is the present, and will show you something about the current atmosphere that will help you with your decisions. The final card is then the future, and it will show you what may happen as a final outcome.

So, you’ll get a little guidance to your problem but not a lot of specifics. But it makes a great place to begin as you are just learning the cards. It is also a good spread when you really don’t need that much information and just want a nudge in the right direction when you have a situation to deal with.

With only 3 cards, there are only so many ways to interpret such a small Tarot card spread. The past, present, future approach is the most common but not the only one. Another way of working with 3 cards is to see them as the root of your situation, what has caused it and the path you need to resolve it.

Need a little more? Four card layouts are also easy enough to master without overwhelming you with cards.

A popular variety is the elemental spread. Deal out 4 cards, and they each represent air, earth, fire and water (in that order). The air card shows you what you need to give further thought to, the earth card represents the solid foundation of the situation, the fire card tells you what action you need to follow and the water card reflects your deeper emotions about the problem. It’s a little more abstract than the above 3-card options, but it gives you a place to stretch your imagination a bit more.

Three and four cards can be a little limiting, so you might want to expand your layout a little to 5 cards instead. There is a bit more flexibility with five cards, so you’ll have a few variations available. One usual one is just a straight-line spread of 5 cards with the following positions:

1. Past
2. Present
3. Influences you haven’t seen yet
4. How you should proceed
5. The final outcome of your situation

It’s similar to the 3-card layout, but adds in a few extra elements that can help you make your choices with guidance.

Another option is a Tarot spread targeted more towards relationship questions, sometimes called a T or cross spread. You deal out 5 cards like this:

With this Tarot card spread, the cards have different meanings: 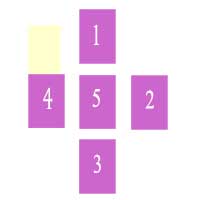 This can give you some great insight into a potential relationship, as well as a peek into what your potential mate is like. That can be a handy starting point when trying to relate to them successfully.

These are just 2 examples of a 5-card layout. There are many other ways of looking at 5 cards, and the Tarot card spreads will continue to get more sophisticated as you add more cards.